You know you have the best boss when they give you free wristbands for a music festival. It wasn’t even just SOME of my coworkers that got them; it was ALL of us. (That’s seven of us in all) I only got a Saturday pass, but two of my coworkers got 3-day media passes. SUPER JEALOUS, but I’ll chill.

So I ended up seeing a little of DJ Mustard, LL Cool J and his DJ ZTrip, SchoolboyQ, and then Kendrick Lamar. Def should have tried to see more, but crowds and lines and waiting were all factors that got in the way.

DJ Mustard mostly just mixed popular radio songs together for the crowd and yelled at us sometimes. Not upset that I chose him over other artists, but we left early due to a lack of interest. Haha. Also, we were not getting enough of a second-hand high to want to stay in that crowd. Oh, DISCLAIMER! I am too short for music festivals, so there may be a lot of complaining in the future of this post. Particularly, DJ Mustard had started about half an hour before my coworker and I got into the crowd, so there was a strong buildup and little space to squeeze in. That’s really the worst thing about ACL. They invite all these people to go, throw some stages onto Zilker and let the people fend for themselves. Short people never get to see what’s going on on stage. It’s a fact of the festival. It’s part of the whole experience!!!!! Bonding with other shorties is actually something that happened for me with other girls at Kendrick. At least you’re comforted in knowing you aren’t the only one.

LL Cool J was pretty great. I’m not gonna lie, I had to laugh at some parts of his performance. I had no idea he’s been around since 1985!!!! I felt like a baby. He still wears beanies while he performs, which is insane to do in Texas even though it was only like 85 yesterday (GREAT WEATHER). His shirt reminded me of those Affliction shirts all the boys wore in 2008. And he kept telling us what to do!! “Everybody say YEAAAH! Say HELLLL YEAH!!! Now SCREAM!” Excuse me. It’s fun the first 30 times, but it just gets a little repetitive after that. But I did have fun watching him! His dj was so good! Amazing! Cam and I were at an understanding that he may even be better than DJ Mustard. He was mixing right in front of us! And he was this older looking, clean cut white guy! I very much appreciated his work. I knew zero songs, but it’s the performance you go for, yes?!

So my two coworkers and I stayed at the Samsung stage to get a good spot for SchoolboyQ. We were right next to the catwalk that was blocked off from the crowd. Some people are really crazy, because they actually jumped that barrier. Mind you, it’s at least four feet tall, so you have to lift all your body weight on the narrow railing, launch yourself another four feet to the other side, and then land on a bunch of people? Not worth it to me. One guy completely ate it on the ground of the catwalk, but got right up and climbed his busted face over the other side! Pretty impressive. Another guy didn’t have such luck. Security was getting fed up later on, so when another guy took the plunge, three of the workers went after him and tried to pull him back over. I don’t know how they weren’t successful, but they didn’t escort him out. The vandal got over the barrier somehow. I guess he had good friends that didn’t let him go.

Another funny thing that happened when we were waiting for SchoolboyQ was that my coworkers and I met some actual school boys! They were across the barrier from us. They looked insanely young, and they were. Three out of the four had braces, they had baby faces that you know were virginal and were dressed like frat boys. That’s all the high-schoolers now, right? Well we got to talking to them, and being almost a decade older than them inspired us to ask them about pop culture like Hey Arnold, Doug, Lambchop, Even Stevens, CatDog. The best of the late 90s and early 2000s! I’ll have to say, the one that hurt the most was them not knowing who Lizzie McGuire was. No Gordo?! No Paulo?! Such a sad life! They were all boys, but all the boys I knew watched it, too! It’s amazing how age gaps separate culture so easily. I’m not saying everything I grew up with was monumental for all ages and should have been absorbed at some point of time, but it shows you how history and human customs change and can be forgotten. DEEP. 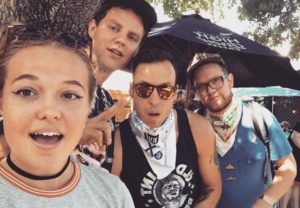